↓ Skip to Main Content
Home › Middle East › The Other Hagop 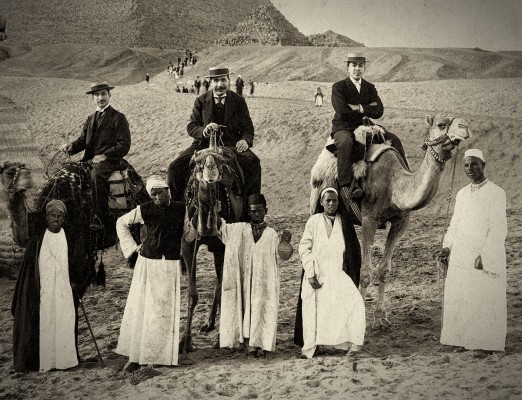 About 1925. Hagop Topalian has his arms crossed, on the right.

I’ve been reading Paris 1919, a multi-threaded account of the six month period at the end of World War One when the French, British, and American leaders met in Paris to sort out the debris from the war and set the way forward. Nobody comes out looking too good. The author is a Canadian and the grand-daughter of Lloyd-George.

Embedded in the book are stories of many ethnic groups and how the Paris Conference attempted to deal with their claims. The Armenians were a medium-sized piece in this puzzle. What remained of them was a ragged, male-depleted group living outside the bounds of present-day Turkey. What supported them at the conference were the Americans, who actually had tried to help the Armenians as they were being slaughtered by their Ottoman tormentors.

Hagop Topalian – the other Hagop – had been lucky. His parents Kevork and Ardem lived in Cairo, where he was born in 1897. The family had a relatively safe place to grow up. At least it was safer than Konya, in the Anatolian highlands, where my mother’s family was from.

Some time soon after the remains of my maternal side of the family settled in Alexandria (about 1920) Hagop became a family friend, and remained one right up until his death in the late 1980s. The photo that you see him in here is a scan from an 8-10 silver contact print (it’s cropped in this blog version), shot complete with Somali camel guides.

Back to the book, though.

Perhaps if you identify yourself as long-generational from England, France, or the United States the experience of reading it is different, but I was quite aware of the different ethnic groups being discussed and found myself getting critical as I read about “my” tribes. The story of the Armenians was horrible, and told with details I had never read. I had a hard time stomaching that the author allows the Turkish side to even voice the argument that Armenians were traitors, but she does. On the other hand, it doesn’t really matter. As the UK/FR/US leaders politicians shifted their view eastward (and past the Balkans, where they made enough of a hash) their objectives also shifted – from at least an attempt at power/economics balanced with societal/ethnic fairness to more obvious self-interest: mainly buffering the new Bolsheviks and the black stuff that pooled up on the ground around Mosul. They knew that a military based on a liquid petroleum had a big advantage over one burning coal, and Mosul looked like a good supply bet – especially for the British. Anyway, as was said, “who’s ever going to remember the Armenians?”