I’ve always liked photographs of crowds. Cameras are great at recording a lot of detail quickly and for me they give a way of studying the people, and seeing how I do (or don’t) fit in. I remember when I first came to Quebec I took so many pictures of people on the street, just trying to understand about my new home. Unfortunately, one of the things I came to understand is that you don’t generally do that here! But it did help me to feel a connection and start to find my place. 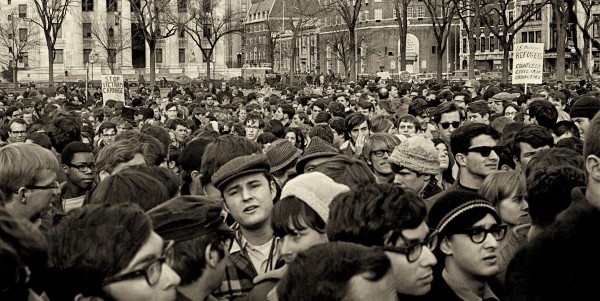 Photos age well too. A picture taken now looks like, well, now. But a picture taken more than four decades ago records something that’s gone. That can be precious if it’s of one person. When the photo is of a lot of people it gives a feeling of the time, the place, and customs.

These are (mostly) Yale students, on the New Haven Green. It was one of the early large East Coast demonstrations against the Vietnam War and as such was covered by the international media and watched closely – by both friend and foe.