Please come along!  Visit this vibrant city over the next couple of weeks on this blog, including photos I’ll be taking of Pope Francis’s visit to the city. With millions of people participating, it will be quite an event. Have you been there yourself? Welcome to share your own experiences or comments. 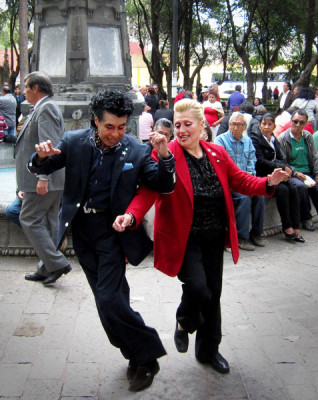 Sunday afternoon public salsa dancing in the park near the city library.

Mexico City fills to overflowing a huge valley that even just a century ago was mostly a lake. Humans pulled the plug on the water and filled in the lake, spawning a huge city that combines new land butting up to old shoreline and islands. Like Damascus – the city my family came from – it’s an ancient metropolis where you can dig down and find thousands of years of human history. Unlike Damascus, it’s a city I can still go to. I’m attracted to its latin spirit, its vendor calls, colors, food and much more. It’s a place where modernity has asserted itself, but where tradition and history are still the connective tissue.

As a young student in the United States I don’t remember learning more than a paragraph or two about Mexico. The basic lesson was about a bloody Aztec culture the Spanish subdued and then how Americans would be forced to invade and sort things out for the Mexicans, who certainly weren’t capable of doing that on their own. Not much has changed really – the same stereotypes are today propagated by popular media and political discussion. Coming up short is any kind of appreciation for the lives and traditions of the 120 million people who live in Mexico, much less the 21 million who live in the Mexico City (Distrito Federal/DF).

Over the next couple of weeks I’m going to be posting photographs and writing as a repeat visitor who in some ways feels at home in the DF, and in many ways never will be. I don’t intend to gloss things over – I know it’s a tough city, and in many ways a difficult country to live in. But Mexico gets plenty written about its rough and unpleasant sides. These posts are for the people who ask why I would ever want to go to the DF. They may not be the reasons you would choose the DF for a travel destination, but they are the reasons that I do.

6 comments on “¿Why visit Mexico City?”