I probably have the distinction of being the only member of my family ever to have eaten camel. Or is it the shame? My father was so shocked when I told him what I had done that his normally eloquent vocabulary left him stammering. I think he was, in reality, half-horrified and half-amused.

There was a comment in the last thread about how different my experiences seem. I’ve always enjoyed a kind of rough-and-tumble form of travel, which is how I ended up in the camel restaurant. But in a larger and more general sense I’ve been wondering if I gloss over the negative sides of places too much – Montreal and Mexico City, for example.

I’ve also been thinking how I could, just as easily, take my photographs from Mexico City and paint a rather dismal picture of the place – make it into a place that no sane person would want to travel to.

Is this the sort of thing you want to breathe? Afternoon in Mexico City…  This hurts both the eyes and the lungs. According to WHO statistics, Mexico has the dubious distinction of placing four cities in the top 35 pollution rankings worldwide. Mexico City ranks 23rd. Above it are Torino (12), Milano (16), Beirut (18), Athens (20) and just below Paris (28). Full rankings here, based on 2009 data. View from Torre Latinoamericano late in the day, March 2016.

Do you see what I mean? And that’s not all, by any means … there’s plenty that I have photographed – and could show – to back up an argument about the badnesses and injustices in Mexico, or Montreal, or even Vermont.

It’s a requirement in journalistic photography that you’re supposed to be honest about what’s shown, but the warp lies in what’s not shown (or talked about). I certainly am showing what I like about Mexico, but I also have plenty of negative opinions (and photos to support them), and not limited to Mexico.

I do think, however, that it’s important to see both sides of a coin. Is that glossing over? Yes, I think it is sometimes. But I think it’s also useful to talk in different terms, especially about a place that gets editorially stomped on. I said in an early post, before going there, that I wanted to present a positive view, since so much of what’s published is negative.

On our last day in Mexico I was speaking to a young Mexican man who was working behind the desk in our hotel. He was young and hip-city-relaxed, with spiky black hair and lime-green framed glasses. He and I had just settled up the bill so he knew we had been there for a relatively long period of time and he wanted to know why. It’s not a hotel frequented by North Americans – most of the people who stay there come up from the South instead. In an abbreviated answer I said we liked the hotel and the neighborhood. He response was that most North Americans – by which I assume he meant Americans – complain about staying there because they don’t want to stay in a “ghetto”. 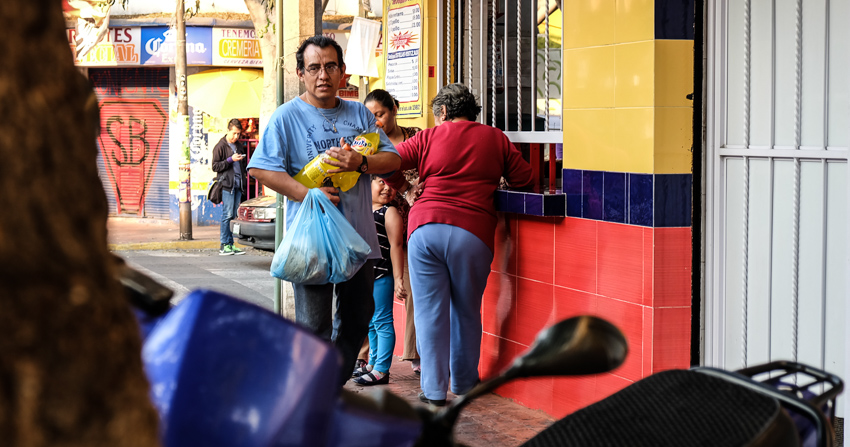 Well, if that’s a “ghetto”, then I guess I’m really out to lunch. But I don’t think I am. It’s a relatively affluent upper class neighborhood, nothing like the rich ones but nothing like the poor ones either.

I’ve always liked living in these in-between neighborhoods. In Montreal we live in a pretty swanky part of town – The Plateau – but under the caché it too has its rough edges (though nothing like the other places).

I hope I won’t avoid politics, the environment, and social issues on this blog. But most of the time I’d rather not go at them head-on. There is a lot to talk about, in Canada as well as in Mexico.  I’m not blind about this, but personally I get tired of feeling inundated by other points of view. I know that mine seep out, and whether you agree or disagree, I hope most of all that you will feel welcome here (and able to say what you think). That’s the way I’d like it to be, and it’s a roundabout answer in my general approach to this blog. I hope it comes through, because it’s not always easy.

Perhaps you remember the market photo a few posts ago (scroll down). I thought, as a contrast, a photo from last weekend would be fun. It’s Montrealers coming out of the winter funk and flocking to one of our largest markets – the stalls are still confined to the indoors but in everyone’s mind it’s already spring!