In search of Auxilio Lacouture 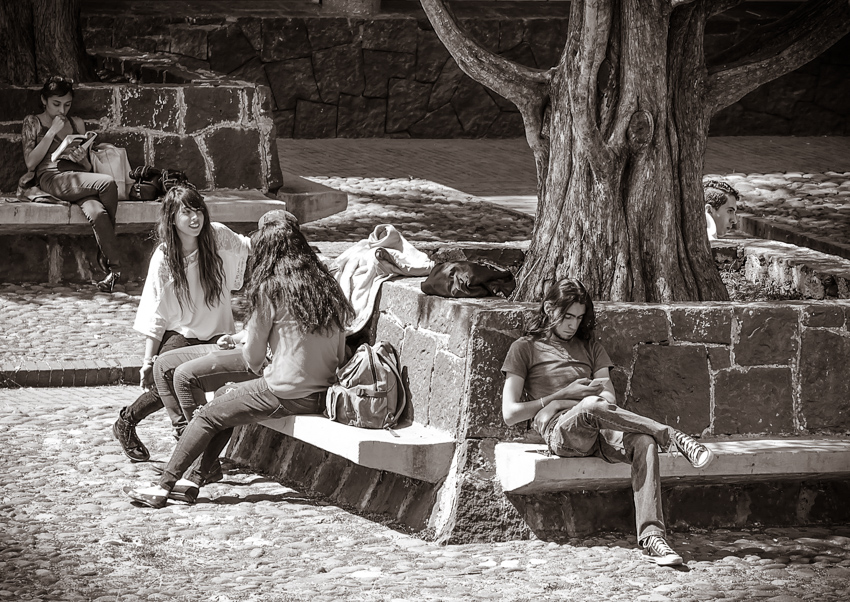 Students reading and talking  In the southern part of Mexico City, the Universidad Nacional Autónoma de México (UNAM) is a 425,000 student campus with many departments. Its graduates form a backbone of recent Mexican history. The current campus replaced a metropolitan location in the 1950s, but the school traces its lineage back to 1551.

I’m not as big a recreational reader as I’d like to be. I’m not that fast a reader and I feel like after I’ve waded through all the web and print articles and news reports I’m interested in there isn’t a lot of extra time left over. But before going to Mexico City I set a goal of reading several books about the city and Mexico, and one of them was Savage Detectives by Roberto Bolaño. I have a hard time understanding why this book isn’t generally known and acknowledged to be one of the great novels of the 20th century. Bolaño, a Chilean who lived mostly in Mexico City and Barcelona, was an enfant terrible of the literary world and a complicated, evocative writer. I haven’t read his masterpiece 2666 yet, but I’m looking forward to it.

The outside surfaces of the university library are covered with a wrap-around mural by Juan O’Gorman depicting different periods of Mexican history. The generally huge scale of the campus is home to other building-sized murals.

Savage Detectives is mostly set in Mexico City and strings together a story of a group of young scruffy Mexican poets searching for a woman (Cesárea Tinajero) who had disappeared from the city several decades before. They considered her to be the mother of Visceral Realism, their faction of the Mexican poetry world. In a complex weave the story line touches many subplots, and one of them involves a character who is a Uruguayan female poet and teacher named Auxilio Lacouture.

Auxilio Lacouture taught at the Universidad Nacional Autónoma de México (UNAM) for several years. According to her own narrative, she was not quite sure what those years were, but one event fixes her as being there in 1968. That event was the Mexican army and riot police killing an unknown number of students in Tlatelolco, a section of Mexico City. A sadly familiar story having a contemporary ring. 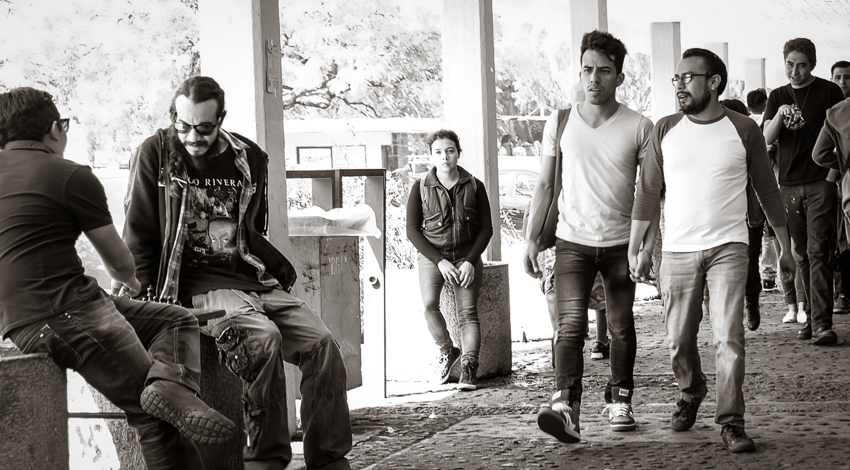 Auxilio Lacouture had the distinction of spending thirteen days in September of 1968 shut up in the women’s bathroom on the fourth floor of the Faculty of Philosophy and Literature as a protest against the Army’s occupation of the campus. She had been reading a book of poetry of Pedro Garfías in a toilet stall and simply stayed there undiscovered – alone and stubborn – standing up (or sitting down!) against tanks and militarism until they left thirteen days later.

I thought it would be interesting to go to UNAM and see if I could find the her fourth floor perch. I was also interested because our friend, Magda, had gone to Medical School there and I wanted to see where she had spent that time. 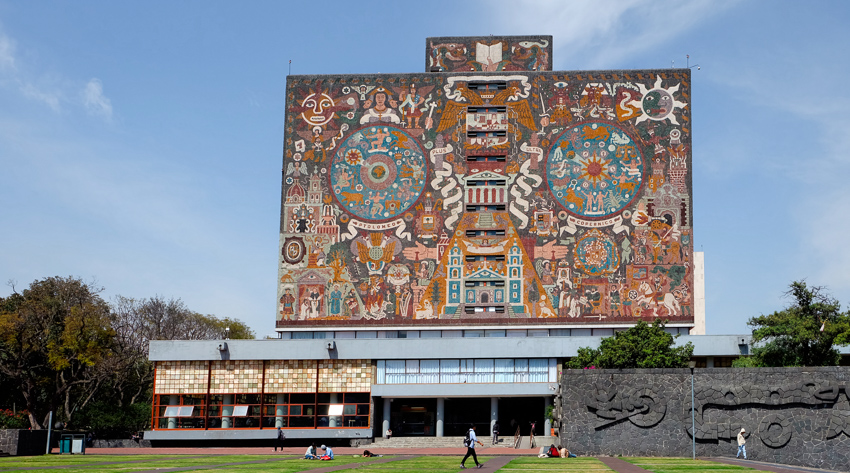 A more conventional look at the unconventional exterior of the central university library. The mural wraps around all four sides.

UNAM is a huge campus – there are almost 400,000 students. To be a student there involves a lot of competition and carries prestige. UNAM reflects both a tradition of academic freedom and social activism that seems part of Mexico.

The feeling on campus was not especially comfortable for me. It was obvious that I was an outsider, as well as being several decades older than almost everyone we saw.

We tracked down the building and floor that Auxilio had been in. A narrow staircase led to the fourth floor. A small – almost claustrophobic – hallway formed a central corridor with many closed wooden doors. The interesting fact was that no one save one student had heard of Roberto Bolaño, and on the subject of Auxilio Lacouture – a complete blank. We found a locked women’s bathroom, but the closest we got to Auxilio’s memory were raised eyebrows as an adult staff member and secretary Googled her. A picture of me outside the bathroom was on the phone stolen later in the day on the Metrobus. It really doesn’t matter to me that Auxilio Lacouture never actually existed. She was fashioned after a real person who was at UNAM (Alcira Soust Scaffo), herself a Uruguayan poet. Considering the position of both Bolaño as a writer and Savages as a book, there should have been no hesitation recognizing him as a writer and Lacouture as a character …

I’m not sure what all of this says. A friend in Montreal who is from South America said it’s typical in Columbia, where she grew up, for the government to eradicate memory. This may be an example of that same phenomena in Mexico.

Sometimes, I have to admit, I feel the same way about the 1960s here.

4 comments on “In search of Auxilio Lacouture”