Renting a bike in Mexico City 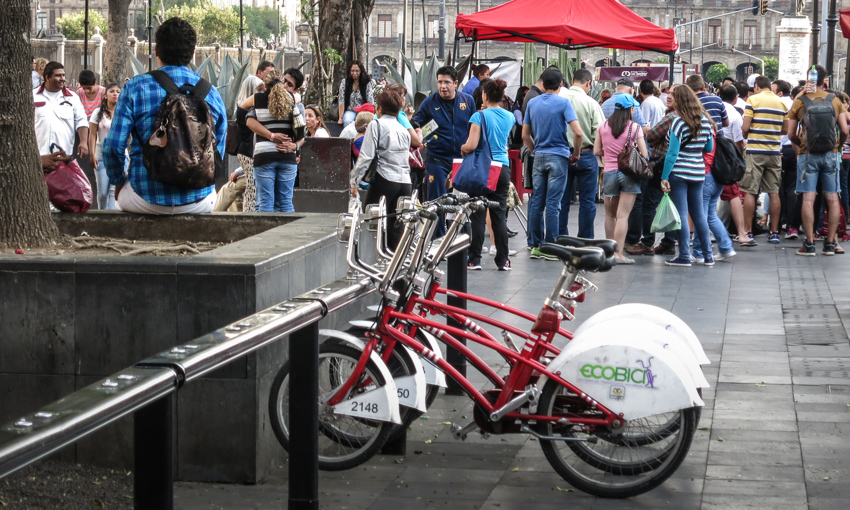 Theoretically, renting a bike in Mexico City as a tourist should be easy. In practice, it’s a bit of a pain (but follow me out). Mexicans with national cards can buy a year pass to ecobici for 400 pesos/21.26USD. As a tourist the rate is 300 pesos/15.95USD per week. In addition the weekly pass needs to get renewed every seven days (surprise!), and that means a trip to the ecobici office and, sometimes, a wait. Of course have an ID (you only need a driver’s license). As tourist it’s still a good deal – see the chart below for comparisons to other cities – but no where as sweet as the year pass. In addition, count on your credit card getting docked for 1500 pesos/79.77 USD for each week. I guess they are protecting themselves in case you turn out to be a criminal with a passport and a desire for the heavy bikes. The deposit is refunded after the rental period is over; our deposits have been returned promptly.

Pedestrians in the bike path One of the first things to practice is using the bell on the handlebars. I put this photo in for Blork, since I know how much he adores pedestrians in bike paths!

You get the treat of lining up with everyone else to get your pass. Unlike polite Canadians your line-companions will be openly annoyed by the long waits, but along with them you too are required to take a written test to prove your extensive knowledge of the traffic laws in the DF. If you’re there when everyone isn’t arguing with each other, you might get some help (and a pass) from the generally friendly staff. Recently they have allowed for an English version of the test, which certainly makes things easier. If you are a normal rider most of the answers are common sense.

ecobici office There are several forms (besides the biking test) that need to be completed and signed; it takes about 15 minutes per person at the counter.

I’m perverse enough that I enjoyed going to the office, at least the first couple of times. After that it gets a little old, and you wish they might at least consider a two week or month pass, so you don’t have to go back repeatedly.

What you can’t complain about, though, is the cost. It’s less than of the cost of other systems, which follows in the pricing in general for public transport: subsidized and affordable from a tourist point of view.

The ecobici bike rental system in Mexico City has stands throughout the core of the city. It’s not everywhere, though, by any means. It is popular and after sounding whiny I have to say that I enjoy using it, and appreciate the bike lanes that are often spacious and well segregated from both pedestrian and car traffic  (the photo above with pedestrians wandering around is on a Saturday afternoon across from the Alamada – a worst case scenario!). Even where there aren’t bike lanes, in my experience if you stick to the interior streets (and not the high speed avenues) riding is not too intimidating if you are attentive and experienced. There’s room and when there isn’t it’s because traffic is stopped, and you can do quite a bit better than everyone else! Don’t even consider going on the high speed streets and avenues.

Bike path on Reforma This is a best-case scenario, but in general the streets are wide enough that ample sized bike paths can co-exist with traffic. This lane isn’t even the main avenue, it’s a service road that runs double-parallel to the main avenue of Reform. It’s a variation on the six-lane highway but with a more workable pedestrian and bike scale to it.

Unlike the Bixi system in Montreal and bike rental systems in many other cities, in the DF there is no way around having the plastic card, so it’s not as friendly to the visitor. But if you are curious about the city and its people, you’ll learn a lot …

How bike rental systems stack up

One comment on “Renting a bike in Mexico City”