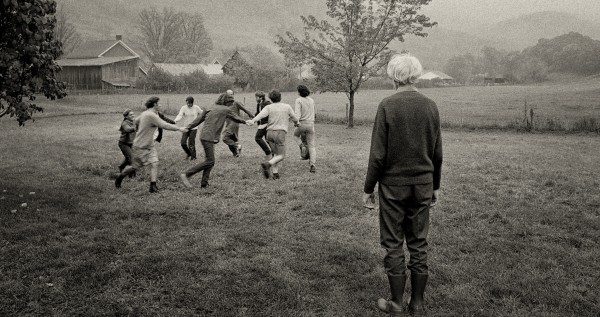 From Fall, 1970 through the following June I was a student of Minor White’s. Though I was chronologically an undergraduate he placed me in his graduate program. It’s people from that class that you see in the circle above.

If history is written by victors it also contains a good measure of current social mores. I was pleased to be sent a link to this recent essay by Susan Stamberg. White died almost thirty years ago. The essay has candor and judgement in its measurement of the man, who I knew only in the context of school and a few extended workshops. But I think there is a poignancy in this photo that’s correct.

I’m also attached to the photo for a personal reason. If you look closely there is a hill hiding in the background fog. It is a small ski area in Vermont called “Suicide-Six”, which was the local ski hill when I was young. So seeing it always makes me smile.